The building is located on Wittenbergplatz, near Kurfürstendamm, one of the main shopping districts of Berlin and the town center of the old West Berlin during the communist era. The surroundings include shopping malls (including KaDeWe – the oldest still in operation in Berlin), restaurants, fontains and sculptures.

The Wittenbergplatz subway (U-Bahn) station is the oldest one in Berlin and was first opened in 1902, although the original station was not the building that stands there today.

In 1910 the Berlin magistrate decided on enlarging the number of subway lines, and the Wittenbergplatz station was chosen as a connecting hub, therefore it was necessary to rebuild an enlarge the building

It was finished in 1913, complete with a new entry hall, built in neoclassical style referring to the KaDeWe shopping mall building located on the same square.

The inside of the building is ornamented according to Jugendstil, a german variation of Art Nouveau, popular at the time. 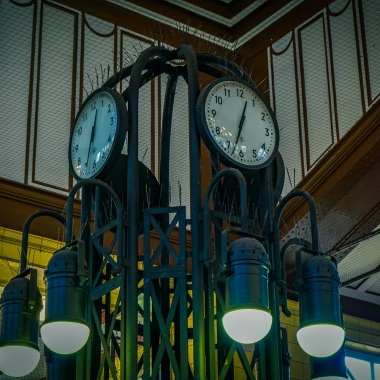 The station was heavily destroyed during the World War II and the bombing of Berlin; after the war it was rebuilt in a more modern style, to save the resources severely lacking at the time.

On the 50th anniversary of subway in Berlin, the BVG received a commemorative ‘underground’ sign from the London Transport Executive. It was decided to use the sign at the Wittenbergplatz station due to it’s importance as a hub for Berlin’s U-Bahn. The sign premiered on July the 2nd 1952

It the early 1980’s it was decided that the building will be a protected landmark. This spured restauration works which brought the building back to it’s oroginal state. The inside of the building was restored together with all it’s infrastructure, to the point that you can today still buy tickets from wooden, heavily ornamented counters.

See my entries on other U-Bahn stations here: